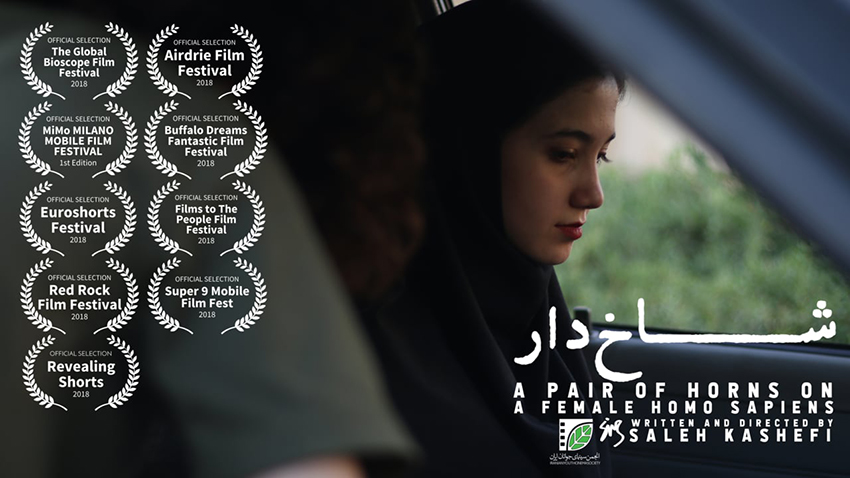 A Pair Of Horns On A Female Homo Sapiens

Saleh Kashefi was only 18 when he wrote, directed and produced his short film A Pair Of Horns On A Female Homo Sapiens, which has already been selected for a number of festivals. His remarkable short film, funded his own money on a budget of $60, was shot on an iPhone 7 he borrowed from a friend.

The film tells the story of a young woman, facing discrimination and criticism based on her appearance

Notes from the MoMo Jury: “The film shows its budget and limitations and there is no polish. But that’s what makes it much more real and intimate. The weakness becomes a strength. The camera work is built around a brilliant idea – so the camera tells the story here more than any of the other films. It’s ALL about point of view, which makes it very thought provoking. Perhaps more so on 2nd view as you know what’s going on.”

We are very proud to have it in this year’s Official Selection of Mobile Motion Film Festival. It will be screened on May 11 at Kosmos in Zurich.

What is the story behind your film?

I have this urge to make films as soon as I’m done resting from the last one and I loved the idea of this movie as soon as I thought about it and I wanted to make it right away.

What were the steps which led you to make it?

I came up with the general idea of the film first – the idea of seeing one side of someone’s face during the whole movie and at the very end the other half gets revealed… Then the pre-production began, it took over 3 months, mostly looking for the right actress. It was a pretty hard and long because the film has a lot of locations and very very little budget.

Why did you choose a smartphone to film with.

I chose a smartphone because the whole idea of the film was that the camera is stuck to the character with a rig so we needed to use a light camera. We looked for a handycam camera everywhere but we couldn’t find one so I borrowed my friend’s iPhone 7. I even made a special rig for the film out of a broom stick, you can see it in the behind the scene pictures.

What equipment did you use?

We used the iPhone 7 and because we didn’t have any money, we didn’t use an app nor any special lens.

How much did you know about filmmaking before you made this film?

I started making films when I was 12 (I’m 19 now) so I knew pretty much but this film was a great experience for me because I challenged myself a lot.

What did you like about filming with a phone? What were the downsides, if any?

I love smartphone cameras. One of my friends has an iPhone XR and every time I see her, I just take her phone and start filming. I’m not really happy with the film because it’s like 40% of what I had in mind. But it’s still a huge success

How successful was the film, personally and in gaining an audience for your work.

It’s been huge. The film has been in over 30 film festivals and won 5 awards and it is still going. I will totally recommend making short films with smartphones.

Looking back on the movie, is there anything you’d have done differently?

I would have worked more with my actress. I was so busy doing other stuff that I forgot about that. Also the last scene was just a backup shot of the real thing. The thing I had in mind was a whole lot different so I would have done it differently. And I would have used lenses or apps for filming or a better phone.

How important are film festivals that give these kind of films a platform for you?

I believe it’s because of these platforms that short films still exist for the sake of them because big equipment or big budgets don’t matter to them. What matters to them is the message and the idea and the talent. So these festivals and platforms make talented kids to make films without worrying about any other stuff than art.